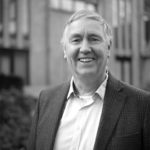 As a pastor of the Catholic Church, I spend my entire life working with people. I see my life as of a pilgrim traveling with people. Faith plays a big role in my life. It has been like a channel, through which I met people, got acquainted, befriended them, listened and (in my work) guided them.

That is where my strength lies. And that is what I have to offer as a person and as a pastor. The work you do as a pastor is about managing and inspiring the many volunteers of which a parish consists, but also supporting those who come to church to talk with a pastor about their sorrows and joys, to prepare a baptism, a marriage, a funeral.

As a student pastor, I enjoyed working with young people from various backgrounds. It was my first real encounter with our multicultural society. Listening to them provided many insights with which they could pick up their thread again. In the Penitentiary Institution the question was different. Inmates sought a listening ear and some acceptance of the period in which they had to serve their sentence.

Since I retired in December 2018, I like to give substance to this, also outside the framework of the church, from the experience gained over the years.

What can we do together?
I feel at home with the method of Servant Leadership, with its characteristics as empathy, healing capacity, commitment to the growth of people and stewardship or sustainability.

I can be deployed as project supervisor, network coordinator, and stimulator full of inspiring and creative ideas. I like to dedicate myself to projects of connecting people. Projects that not only realize a certain goal, but also forges a team along the way and provide participants with joy, recognition and development. Cooperation brings up the best in people! In addition, I remain wholeheartedly available for the work of a pastor.

Contact me at once, or take you time, look further on my site and decide later.

It requires to look with different eyes. Learning to listen to what goes well, what inspires people, appeals to them, makes them enthusiastic, is more than ever necessary.

MAY I HELP YOU?

As part of a two-year study diaconal work at Luce, center for Religious Communication it was obligated to do an internship. I chose the Community Home Vollenhove in Zeist as place for my internship. Decided was to do an enquiry in the L-flat in Zeist, where the Community Home is located. A  group of volunteers rang at almost all the doors and asked if some questions could be asked. Many of the residents, from many different nationalities, gave a warm welcome. The method of presence approach was used. Finally there were 75 usable interview reports.

Objective: “By meeting with each other in a warm atmosphere, have an open conversation about spirituality and religious meaning. Listening and showing respect for each other’s opinions, were key tools.” New activities for the Community Home resulted from the conversation reports.

As a deacon of the Catholic Church I can guide people at important moments of their lives. Baptism and Marriage are Holy Sacraments and can only be administered by a priest or a deacon. I have guided and supported people throughout my working life in this way.

Time and again these are intensive contacts at emotional moments of life. The preparation consists of organizing all the practical things that have to be arranged. But especially the deeper side (the side of our hearts) of what it means to be baptized, to get married or to prepare the funeral of a loved one. Profound are the discussions between partners in Baptism and Marriage. And with a Funeral between the relatives of the deceased. My task is to support and guide these conversations. So, stones are gathered to build a celebration of Baptism, Marriage or Funeral with its own personal touch.

Many parishes are in a merger process. More and more churches have to close due to fewer Mass attendance and, therewith, less financial means. This is a painful process. Countless parishioners have often spent many years of their lives as a volunteer for their parish. These volunteers are heart and soul of a flourishing congregation.

Already in 1994, together with pastor Leo Cornelis, I initiated and supervised an unavoidable merger process, in which two parishes, two communities, were brought together and one of their churches had to close. That meant leaving two cultures behind and developing a new culture for the people of the two parishes. A new culture, in which all of them could feel at home.

Everyone has a calling.
What is important is that you discover which one that is.
That calling does not come from above with a thunderous voice of God.
That calling comes from His whispering deep within you,
from the core of your being.
God expects nothing more or less from you
then that you live the life for which you were created.
He wants you to become yourself.

Below I show a few projects that I have worked on with great pleasure.

In 2016, this six-meter-high open warehouse was built on the benches in the Hofkerk. Cheerful colored balls were hoisted up in buckets by the children. Driven by gravity, they then found their way through the corridors of the warehouse, rolling and bouncing. Children from five schools had made the numerous parts of the warehouse. In collaboration with Stichting Kunsteducatie de Rode Loper, art teacher Gerald Maurice and kinetic artist Mark Bischof.

The Hofkerk in Amsterdam Oost is named after the holy Martyrs of Gorcum. These 19 martyrs were hanged in 1572 in Den Briel, near Rotterdam. In 1867 they were declared holy by the Catholic Church. In 2017 a 150 years jubilee was commemorated. It took a long time to think how we could give this jubilee its shape.

With a project group we came to three separate projects:

• The publication of a book about martyrdom and its meaning in the society of today:
‘To stand for your belief – martyrdom as a binding concept.’

• An exhibition with objects from the Gorcums museum and various churches.

• And a project with children about their ‘heroes’. The children were shown around the church and asked to focus especially on the stained-glass windows. Two questions were put before them: When are you a hero? Who is your hero?

With the help of art teacher and glass artist Marjolijn Wigbold, the children themselves made a stained glass window of their hero and wrote a story about it. This last project again was in cooperation with Stichting Kunsteducatie de Rode Loper.

In December 2018 they published a  pocketbook consisting of the most beautiful stained glass windows of the children with their accompanying story. From the preface:

Here they are, our heroes. No matter how different they are, they pull you in, they attract you, give you a boost, stimulate your imagination. Be inspired by this collection and add your own hero to it. Heroes – we can’t do without! 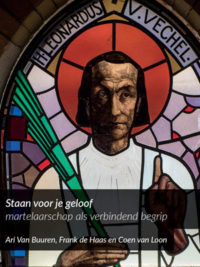 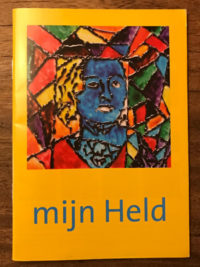 The Passion is the annual Dutch Television spectacle on Maundy Thursday, the Thursday before Easter, in which the suffering of Christ’s final hours is portrayed. In 2018 it took place in Amsterdam Zuid-Oost. Together with Ziza, a bureau for Marketing, Communication and Crowdfunding I organized meetings with several churches about the coming of The Passion. On the day itself these churches had their doors open and offered a number of activities. In addition, a magazine was published with which the churches from Zuid-Oost presented themselves.

In the press release of the Evangelical Broadcasting a day after The Passion:

“During the preparation of The Passion 2018 various churches in Zuid-Oost were able to join hands. Coen van Loon, pastor at the Hofkerk in Amsterdam and involved in bringing together churches in Zuid-Oost, says: ‘People who had not met before, joined forces and worked together day and night to create activities. Thus the churches of Zuid-Oost became visible in all sorts of ways during the past period. The Passion has given them a great boost!’”

Celebrate life! That is the most simple description for the word ‘(liturgical) celebrations’ which is used in the Catholic Church for the services on the Sunday morning. Protestants use the word ‘(worship) services’ for these meetings. In addition to the weekly liturgical celebrations in various parishes in which I have preceded, I would like to mention three more experimental celebrations here, of which I took the initiative.

Pastor deacon Coen van Loon is an industrious worker in the Lord’s vineyard. He is very involved in the work he performs. He particularly enjoys working on a project basis. He throws himself into the project with great enthusiasm using his laptop. He then collects a lot of information and ensures that employees are sufficiently informed. Sometimes it is necessary that his enthusiasm and pace have to be slowed down a bit, because his environment can no longer keep up with him.

Chairman of the Clara & Franciscus partnership

In the meeting of the editors of the parish-Magazine of Saamhorig, Coen was an unmissable force with his fast, creative and connecting thinking. It took him there and elsewhere not much effort to connect all kinds of things and situations that lead to new ideas and proposals. He scattered those ideas and proposals as the sower who hoped the seed would rise in fertile soil and bear fruit. ‘Coen, continue to stir up people and groups of people, and, preferably, in God’s name’

Coen has the skills to poke through all the noise and to go to the underlying emotions. This allows me to better process what has happened in my life and what is still happening. He creates a calm and safe atmosphere that makes you feel at ease quickly. This gives the opportunity to get to the core.

Coen thinks people are more important than rules and traditions. He can fine-tune what people think and feel, and what therefore is needed in a specific situation. He dares to take risks and is willing to make compromises. He is reliable and pleasant to deal with. A hard worker, who puts out his hands, when necessary. With professionals who measure their time and effort, he has less doing. Are you on the same track with Coen, working with him is a party!

Coen is a man with vision, and a man who inspires vision; when plans are developed  with regard to connecting churches and society, you can count on him. He can enthuse and connect, especially at the level of ‘ordinary’ people and ‘ordinary’ life. Coen has a ‘diaconal’ heart – a heart for people in oppression. He has courage and entrepreneurship and he is a nice guy to work with.

I know Coen as someone who is searching for an ecumenical connection and is prepared to invest a lot of energy in setting up and supporting ecumenical activities.

Chairman of the Council of Churches in Amsterdam

On behalf of Caritas Amsterdam active for the undocumented migrants

Pastor in the partnership Clara & Franciscus, Amsterdam East and South-East

Pastor in seven parishes on the Utrechtse Heuvelrug

Student pastor at the Haagse Hogeschool, The Hague

Pastor in two parishes in Hilversum

Trip from Amsterdam to New Delhi, India. By bus.

Born in The Hague

See my LinkedIn for a complete overview.

Now, as you have a picture of who I am, how I work and what I can do for you, let’s meet and lay the foundation for a new and successful business relationship. I’m looking forward to hearing from you!

I can work for you as

Projects of connection and reconciliation that give enthusiasm, recognition and personal development.

I can help you with